“Duke, what the fuck are you doing?”

That’s what I just overheard from outside my apartment window. “Duke, what the fuck are you doing?”

It caught my attention and gave me a chuckle, but it wasn’t much of a surprise. You see, we’ve lived here for a year now in these apartments. And while they have good points — our rent is, cheap, relatively speaking, and our apartment has been renovated in the past year or few — they also have bad points. 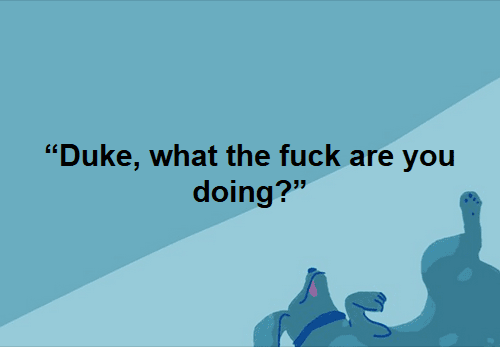 First, we’re about a half mile out from the end of the runway at Oceana NAS, which means jets flying literally overhead. I think we’re technically supposed to wear ear protection outside.

Second, while the entrance to the complex is landscaped and pretty, there is a main circle made of three apartment buildings with a courtyard in the middle which is ugly grass, air conditioning machines, and a single lamp post in the middle. Guess what our apartment faces? If you guessed that courtyard, points for you!

Third, parking is a pain if you get in late. We’ve had to park all the way across the complex. Exercise is great if it’s on *my* terms…

Fourth, while we’re back a ways from Virginia Beach Blvd, we abut I-264. It’s not the trucks and whining motorcycles that are the issue, it’s that we’re in the major path to get to the closest hospital to the beach and significant parts of Virginia Beach south of here. As I type this, another ambulance is going by.

But all of those — sans perhaps the jets when they fly after midnight, which happens every week or two — almost pale in comparison to our neighbor and his dog Duke.

They take Duke to go potty a lot. We know this because at literally all hours of the day and night you can hear father or son taking him out. Partly because they tend to make a loop around the end of the apartment building, passing by three of the four sides (the remaining wall is shared with the apartment in front of us).

They are not quiet. At all hours, you can hear them even from the far side of that middle courtyard, so you can imagine how clearly we hear them when they’re closer to our apartment. Sure the walls are a bit thin, but still.

…Because that’s what we’re treated to, hour after hour, day after day. My wife and I long ago started making fun of them, suggesting things that might have the same sort of understanding: “Duke! Duke! Explain the significance of Shakespeare to the modern Western economy!”

Seriously. The things they say to that poor dog.

But it gets better. Apparently, someone has been complaining (not us!) because a few weeks ago when I happened to go outside, dad told me that they were being forced to move because Duke was not supposed to be allowed to live here, and how wrong that was because Duke was a service dog!

My brain froze and broke at that point. Duke? Service dog? WTF? Like… if Duke is a service dog, then I can fly and poop rainbows and candy out of my ass. Duke is a service dog in the same way that a toddler is an Admiral in the U.S. Navy. I was stunned by his statement, but I think managed to keep my facial expressions in check, just replying with something like, “Wow, that just sucks.”

But here we are, a few weeks later, and Duke is still around, along with the family. I noticed the last time I saw him that he now wears a vest with “SERVICE DOG” written on it. Which means they either found a place that sells those vests, or found a place that would unethically certify Duke as a service animal. I hope it’s the former.

Either way, I don’t truly mind Duke all that much. Although we move in a couple of weeks, and my wife and I agree that leaving Duke behind truly will be the second best part of moving after not having the jets so close (and occasionally at literally 2am).

This site uses Akismet to reduce spam. Learn how your comment data is processed.